Last weekend Ardee and District A.C. were well represented at the 2015 Louth track and field championships. After a change of venue earlier in the week Friday evenings field events were postponed due to heavy rain. However Mr Sun came out in glory on Saturday morning to dry up the track and help to ensure the smooth running of events. 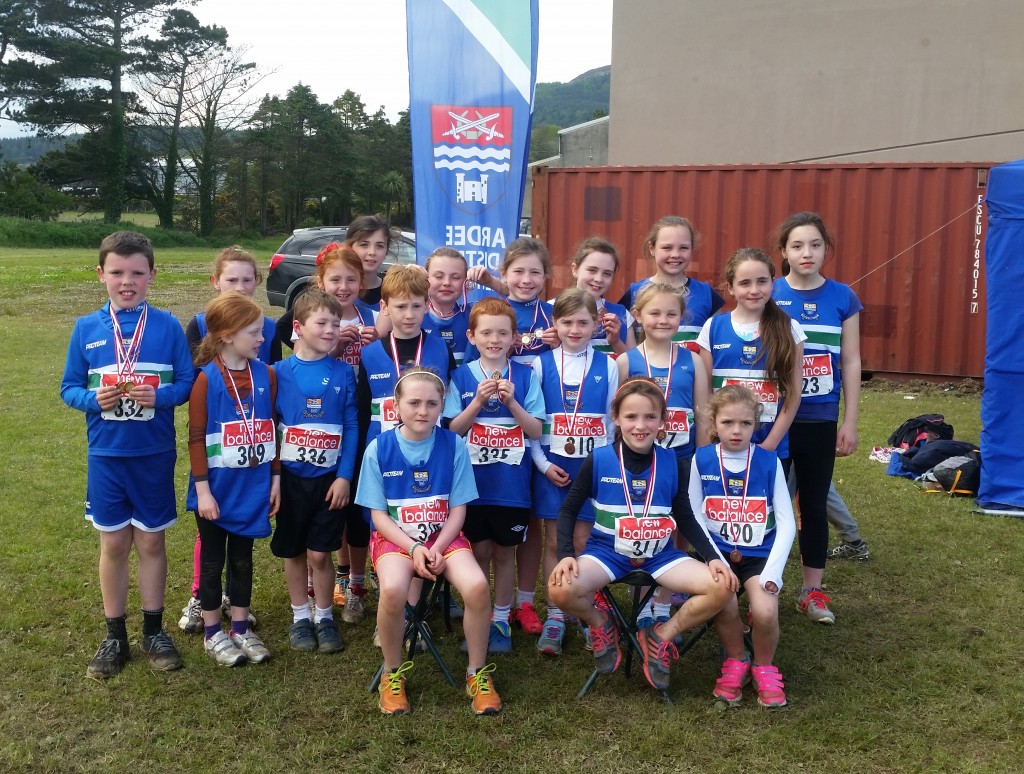 Niamh Tenanty ran a superb final and picked up a silver medal in the u16 girls 100m. 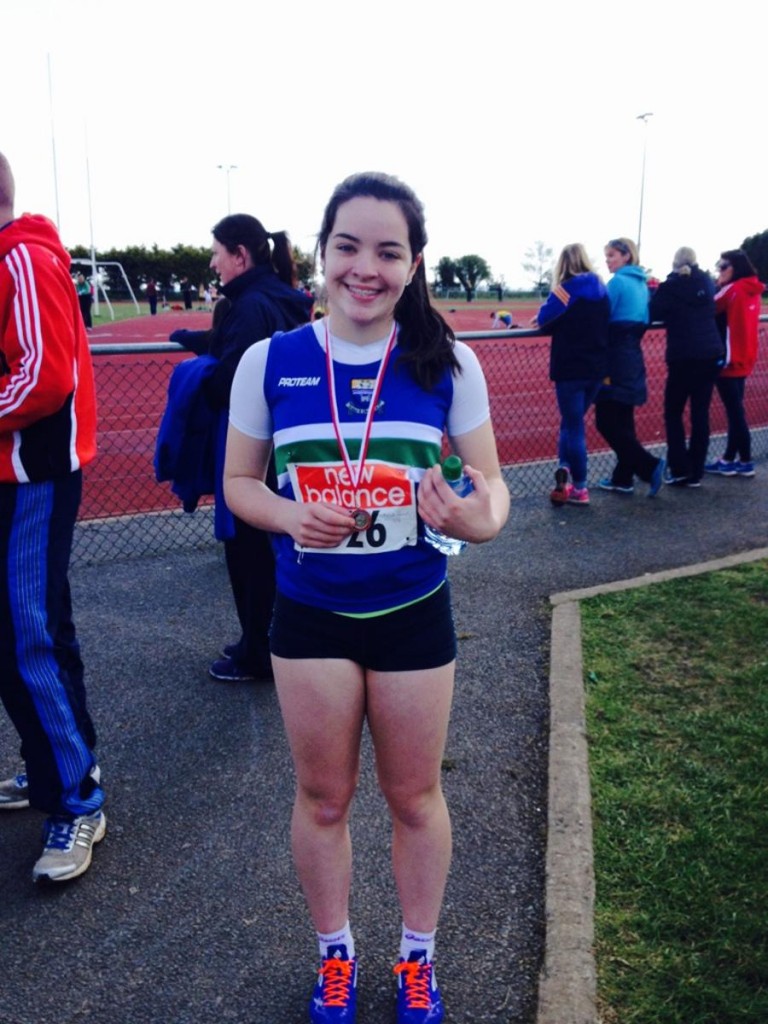 In the u14 800m Abbie Sheridan once again proved herself as a middle and long distance runner as she effortlessly took the title and gold medal for first place. 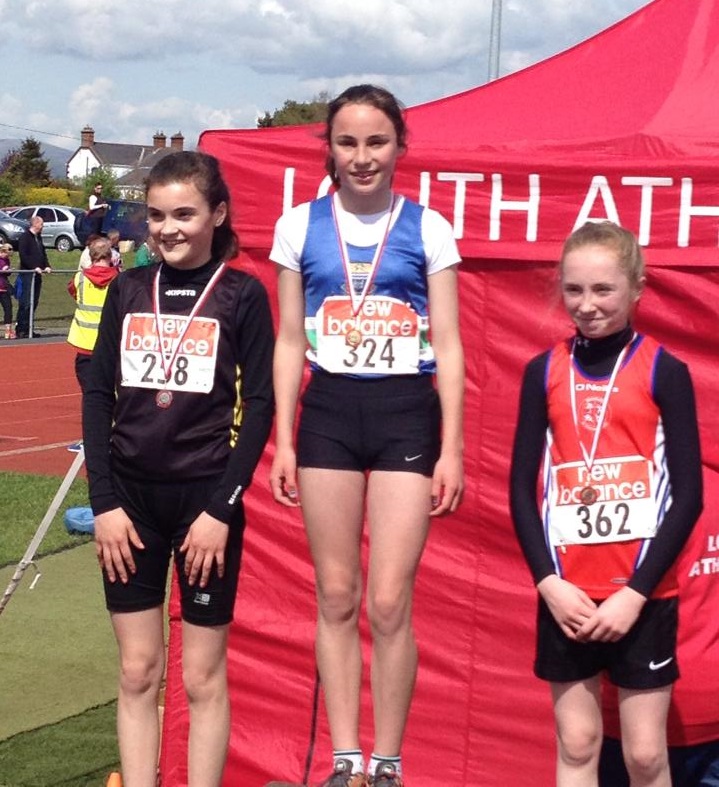 Emma Gillespie and Aoibheann Carolan both competed well in the u13 events, while Kellymae Smith put in a great effort in the u13 shot putt.
At u11 Ava McNally won silver for second place in the girls turbo jav. 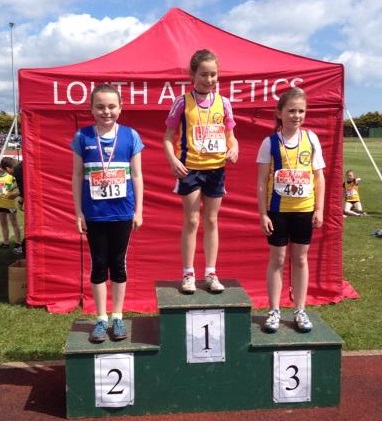 Samantha McCarron and Hallie Sands ran well in the 600m with Hallie putting in a super finish on the home straight taking silver for second place. 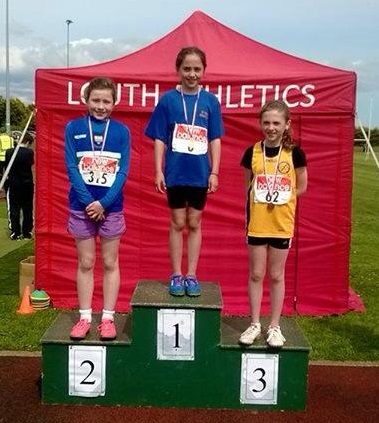 Hallie and Ava then joined Ruth Gillespie and Orlaith Carolan to finish in first place in a very exciting u11 relay. 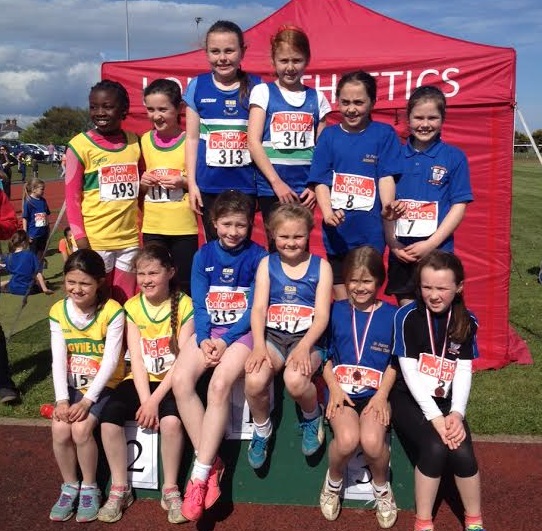 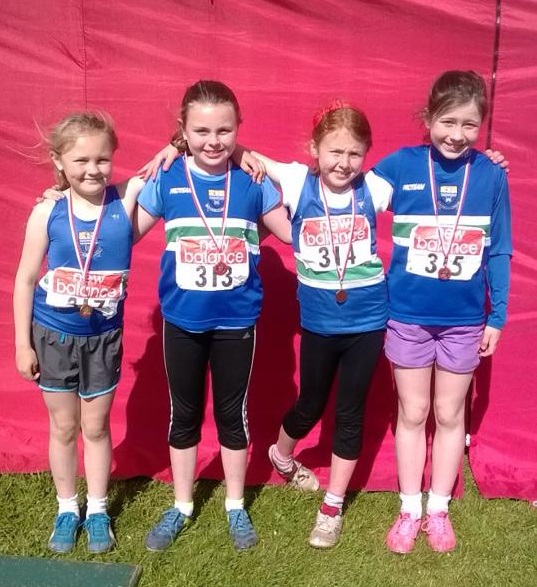 It was 1,2 for Ardee and District A.C. in the girls u9 turbo jav. Paulina Kelly took the top spot in first place with debutante Sarah Lynch to her right on the podium in second place.

Paulina and Sarah along with Katie Sands and Natalie Rock put in a fight at each station to claim a place on the podium coming third in the u9 relay. 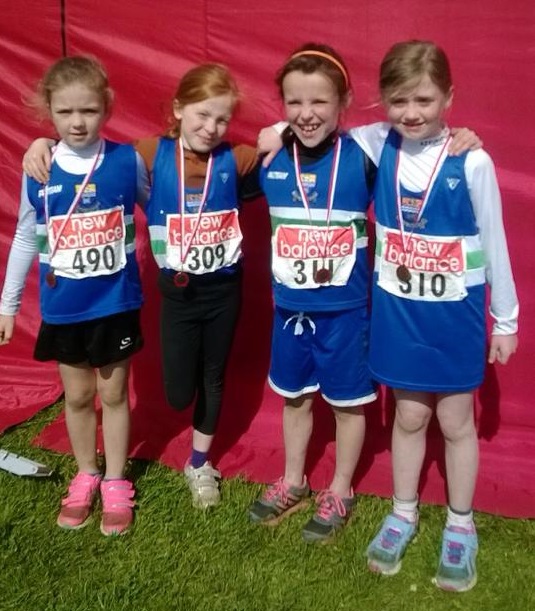 Craig O Mahoney ran in a closely contested u16 100m final finishing just outside the medals.

Rob Kelly stepped up to the timed challenge as he finished in second place in the boys u10 200m. 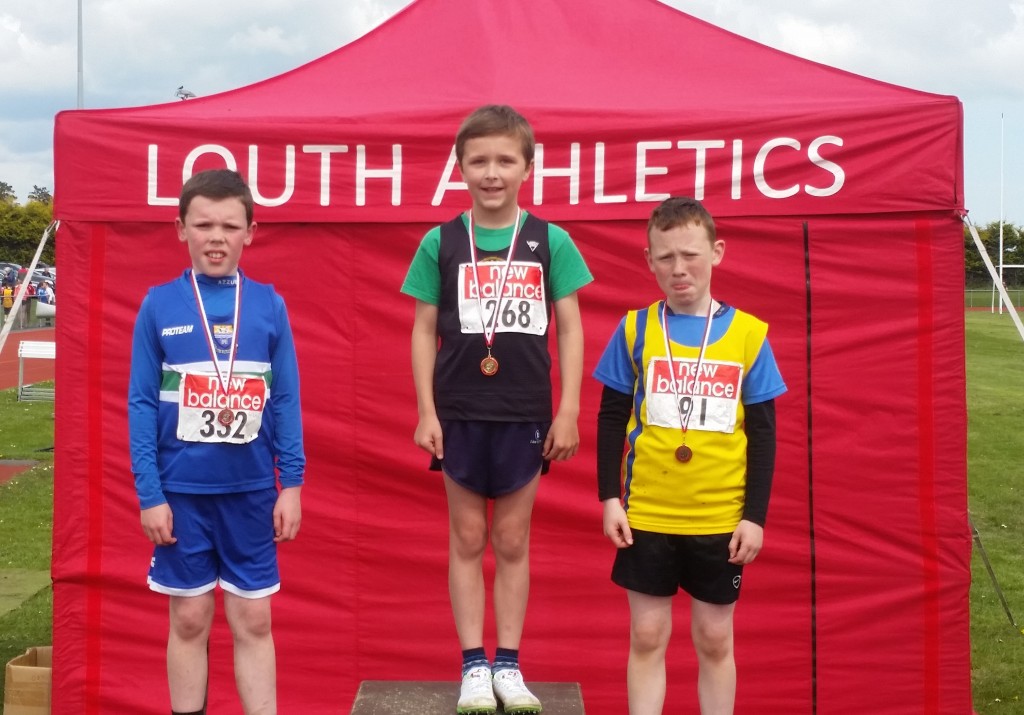 However in his favoured event the turbo jav, Rob left the onlookers without a doubt as he was once again declared Louth turbo jav champion for his first place. Standing to his left on the podium was Joe Murphy as he took bronze for his third place in the turbo. 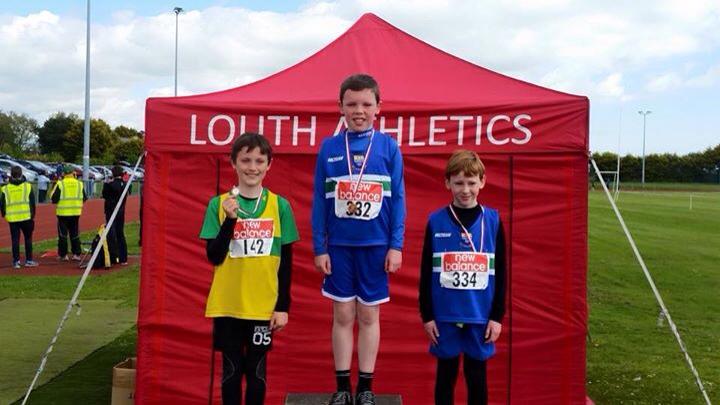 Jack McCarron and Neil Quinn joined Rob and Joe to show themselves as a force to be reckoned with as they powered round the track to take the title for first place in the u10 Relay. 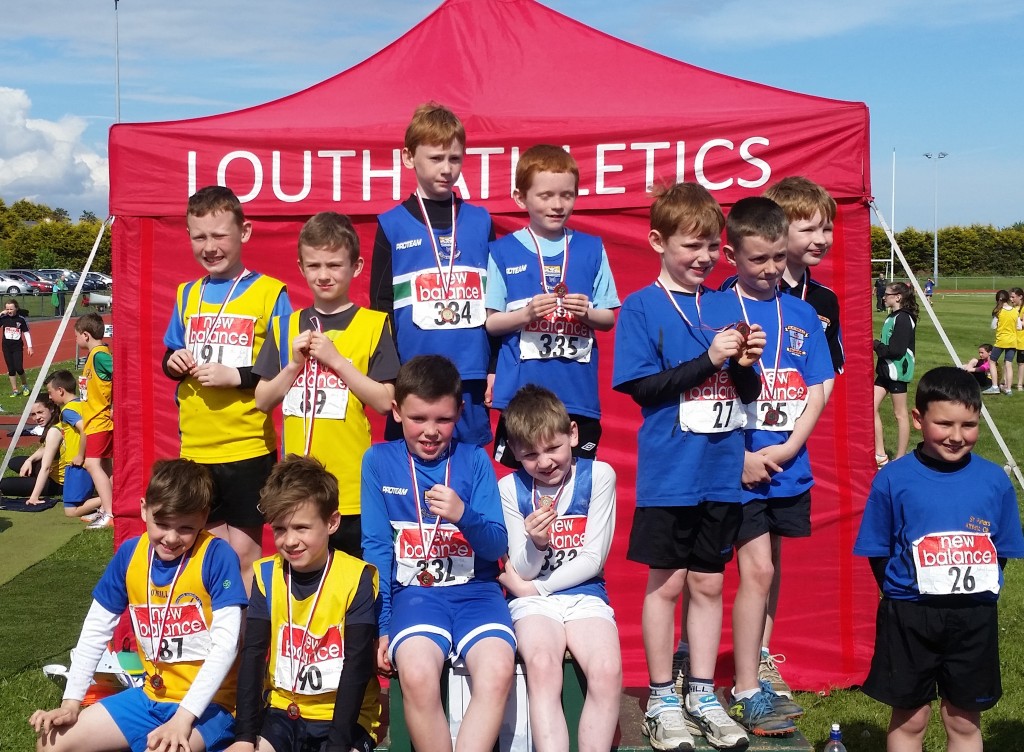 Charlie Sands was a stand alone athlete in the boys u9 events where he competed with great ability and distinction. 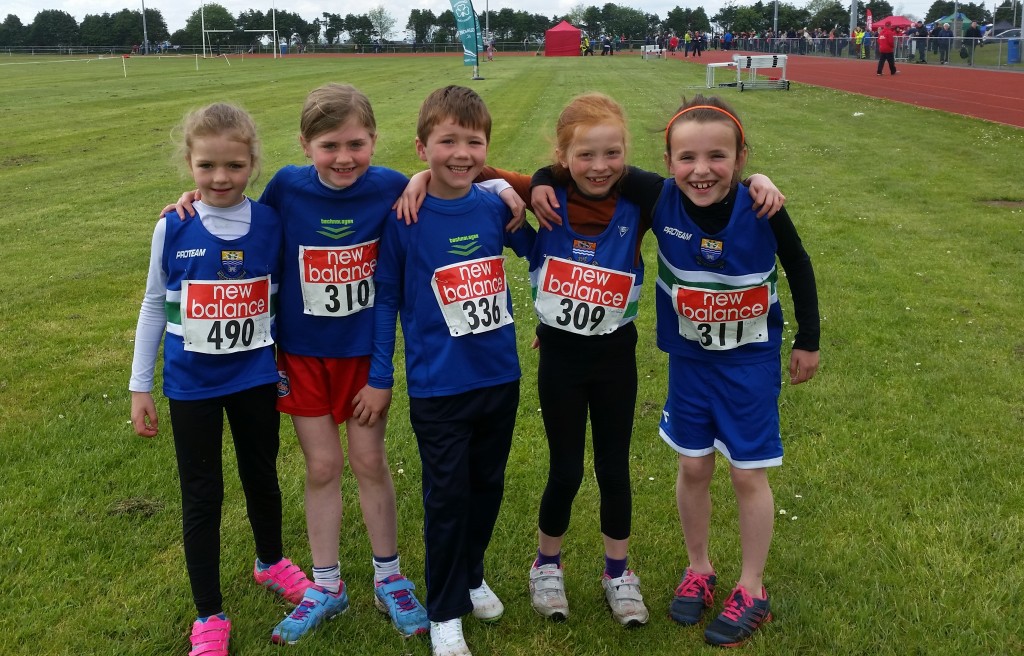 Charlie Sands (u9 Boy) with the Girls u9 Team

The good weather continued into Sunday morning, although it proved very windy it remained dry and mild. Out on the track Kyle Quinn u12 took on the 60m hurdles and came home in third place for the bronze medal. 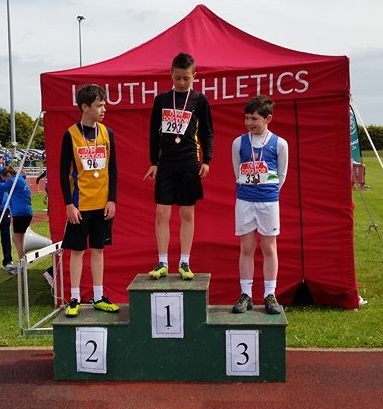 Big brother Evin Quinn threw his way to silver in the boys u15 shot putt. Evin also jumped for the podium with a bronze in the u15 long jump. 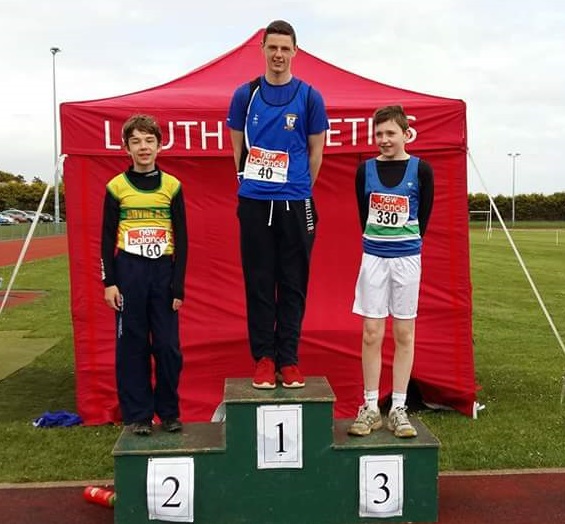 Conor McMahon won gold in the u16 hurdles where he picked up an injury and had to pull out of his remaining events. 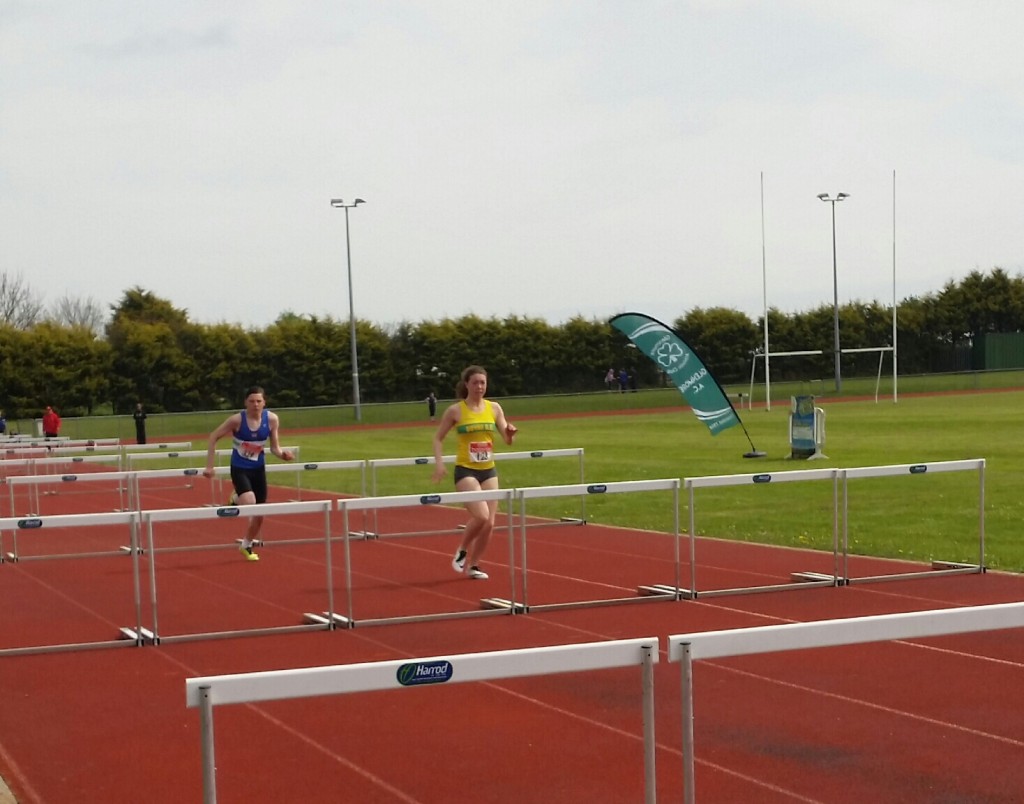 Conor McMahon Warming up for the u16 Hurdles

Niamh Tenanty claimed her second medal of the championships when she won silver in the girls u16 200m sprint. Sisters Niamh and Tara McGuinness both competed in the girls u16 1500m running a steady race throughout. Both girls made it onto the podium with Tara in second place and Niamh right behind in third. 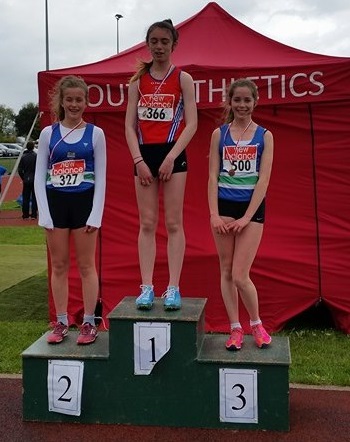 Topping the podium again on Sunday was Abbie Sheridan in the girls u14 1500m. Abbie ran with the group for the first lap and then decided to take the race on, with each lap she moved away from the group and with a sprint finish was undoubtedly declared the champion adding another gold to her growing haul. 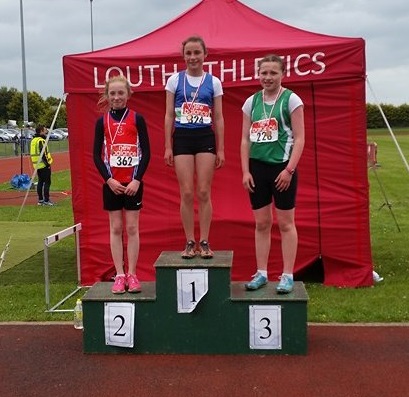 Emma Gillespie and Aoibheann Carolan both made it to the final of the u13 60m hurdles. Emma finished strong in fourth place and Aoibheann after a strike with the last hurdle finished in fifth.
The distinct royal blue Ardee and district colours crowned the podium for the girls u12 turbo jav. Hugh smiles and congratulations for the girls in the u12 turbo jav as Eireann Hoey stepped on the podium for third, Rebecca McCarron in second and topping the podium Adah Murphy was crowned the champion in first place. 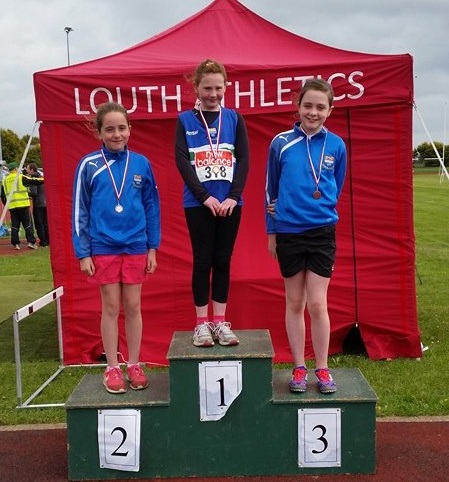 Well done to all who competed over the two days and well done also to all who assisted in the smooth running of events.